Unlike the numerous releases made in the past, which concerned breeding specimens of very poor genetic quality and very often imported, our LIFE Perdix project aims to reintroduce in nature suitable specimens and of origin compatible with that of the partridge populations that historically occupied the Peninsula. For this reason, a large number of breeding pairs have been genetically sampled: the genetic selection was based on the current knowledge available, related to the presence of mitochondrial haplotypes in individuals of contemporary partridge compared with museum samples. 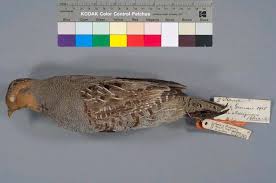 This selection allowed to identify which individuals have haplotypes recognized as Italic and to use only these for the formation of breeding pairs. The offspring of the selected couples will also be suitable for reproduction: in fact, the mitochondrial DNA, or the marker used for the selection, is transmitted by maternal means, consequently all the children will have inherited it.

But where is the DNA to be analyzed taken from? The extraction takes place from the pectoral feathers, because these are subject to frequent replacement and therefore less keratinized than those of the tail or wings.

In addition to genetic selection, the laboratory team also identified and optimized a protocol to avoid consanguinity, ensuring genetic variability as much as possible.